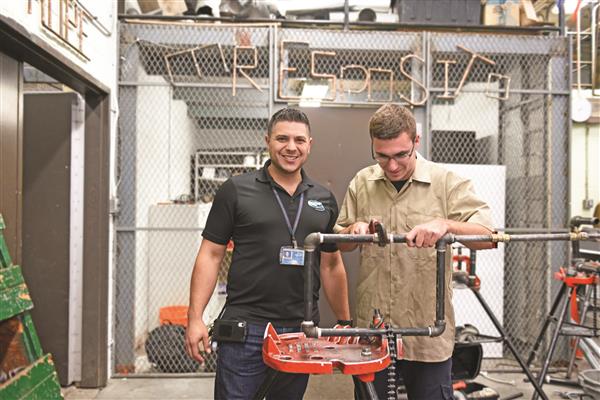 As a high school student, Frank Esposito knew that he wanted to pursue career and technical education, he just wasn’t sure which class to take. At the time, Frank was working for his uncle's plumbing company. His uncle suggested that getting some formal training in the trade would be a great way to expand his knowledge and help him grow in the industry. That pragmatic approach helped him decide to pursue the two-year plumbing course at BTC.

Frank thrived in the class, excited by the state-of-the-art equipment that students are trained to use. “There was a lot of technology that I wasn’t exposed to as an entry-level, 15-year-old kid in the field,” he said. “I was able to get hands-on with those tools and really take advantage of the class.”

Ray LoFrese, the plumbing teacher at the time, quickly became a mentor to Frank. “He legitimized the trade for me,” he said. “I only really knew my uncle in the plumbing business. Seeing someone successful in the industry outside of my family was motivating.”

Through the work-study part of the program, Frank continued working for his uncle. The skills he learned in the classroom were immediately put into practice on the jobsite. Rather than going to college after graduation, he entered the workforce, joining his uncle’s company as a full-time employee.

“I broke my mom’s heart when I didn’t go to college,” Frank said. “I did very well in school, but I saw a pathway to success through working. I moved to another company when I was 19 or 20 and made more money and had more responsibilities, which helped me grow in my career.”

Six years after graduating high school, Frank received his New York State Master Plumber’s License. At 23 years old, he was the youngest Master Plumber in the state. That credential not only made him more competitive in the industry but also allowed him to start his own business.

That same year, Mr. LoFrese was promoted to Work Study Coordinator at WTC. When it came time to find a replacement, Frank’s name came up.

That first year, Frank found that he had a passion for teaching, and brought a new vision to training the next generation of plumbers. As a business owner and a teacher, he was able to build up the industry from the inside out.

“I really connected with the kids,” he said. “I saw a great opportunity to train people in the field because as a business owner, I knew how difficult it could be to hire someone knowledgeable. I knew what it meant to get someone ready to enter the workforce. That first year, I hired one of my students and he still works for me full time.”

Frank’s program is the only high-school plumbing course in Suffolk County, giving him the responsibility of developing the industry’s new talent. “Typically, people only become plumbers when they know someone in the field already,” he said. “It’s almost impossible to get hired by a company if you don’t have the basic skills. That makes this class so essential.”

Click here to read more about our Plumbing and Heating Program