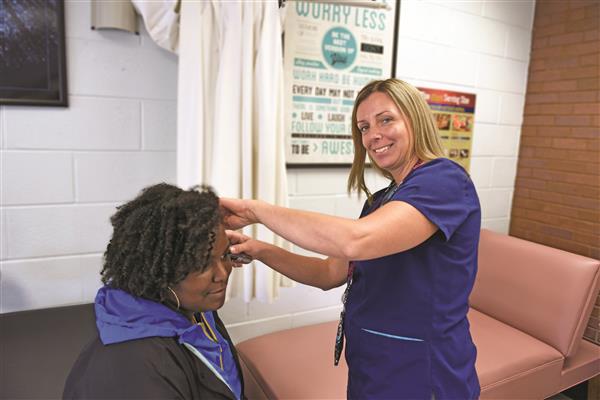 When Kelly Farrell was in high school, she didn’t see the Clinical Nurse Assisting class at the Bixhorn Technical Center as just an elective – it was assurance that she was following a career she was meant to do. “I always wanted to be a nurse,” she said. “But, you always worry that you might make the wrong decision when it comes to your career. How do you know at 16 what you want to do for the rest of your life? My time at ESBOCES gave me confidence in knowing that I truly loved what I wanted to do.”

That confidence helped Kelly excel quickly as a nurse. She completed her Clinical Nurse Assisting certification before her senior year of high school, and became a Licensed Practical Nurse through ESBOCES Adult Education Program two years later. She became a registered nurse three years later, and started working at the Stony Brook Hospital Neonatal Intensive Care Unit (NICU), where she would stay for 15 years.

“It was challenging,” Kelly said. “But I was able to work while I went to school. That was one of the great things about going to ESBOCES. I was working part time as an LPN and making pretty good money as a college student.”

Working in the NICU was hard on Kelly, especially after she had her own children. As her kids grew up and went to school, she found herself wishing she’d pursued a line of work in a school community. She’d never considered being a school nurse before the opportunity at the Milliken Technical Center opened up.

Now, Kelly has the benefit of being a nurse in an environment she loves. She remembers all the lessons she learned as a student every time she walks into one of the Clinical Medical Assisting or Clinical Nurse Assisting classrooms. Sometimes she’ll even run into Linda Niosi, one of her former teachers, who occasionally substitutes in the building.

“I mentor some of the CNA or CMA students – and I remember what it was like when I was a student,” Kelly said. “I walk into the classrooms and it feels like time stood still. I really love my memories at BOCES. I always did well in high school, but I did really well at ESBOCES because I was working on what I was interested in. I have that in common with the students.”

As a school nurse, Kelly has a special bond with the students who come into her office. Meeting with students who aren’t feeling well, or may be feeling vulnerable, provides a special opportunity for her to connect with the school community – and can lead to the most gratifying moments.

“The past two years I was working with a student who was a challenging diabetic,” Kelly said. “We spent a lot of time working together, from education, to just being someone he could trust. When he graduated, he brought his entire family into the office and thanked me personally, which was really sweet. It made me feel like I’d done something really special with him, and that I was just as important in getting him to graduate as anyone else in his life. Having that moment – it was really rewarding. I miss him already.”

Click here to read more about our Nurse Assisting Program