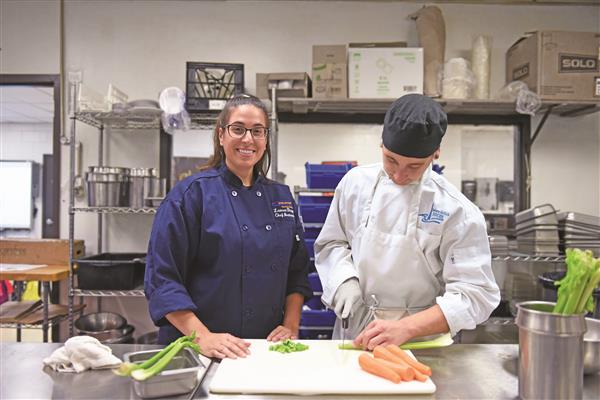 Helping her special career education students reach their individual goals inspires Lauren Daquet. Teaching wasn’t a motivating factor for Daquet when she began her career as a culinary student at Western Suffolk BOCES in her junior year of high school. Then, what got her excited was being in a program filled with like-minded individuals who were all highly focused about studying culinary arts. “Everyone was there for the same reason,” she said. “Everyone loved culinary and it just seemed like there was so much opportunity.”

After high school, she attended the Culinary Institute of America for Baking and Pastry Arts. “I had worked at a bakery since I was 14 and loved it. I wanted to open my own bakery. I saw my future in baking,” Daquet explained.

By senior year, Daquet’s ideas about her career path changed after she was nominated to be group leader. In this role, Daquet acted as the liaison between her class and their teachers and staff, took on additional responsibilities, and also spoke at graduation. Daquet spent her time fixing the schedules of her classmates, sourcing information for them, getting answers from the faculty, and many other things including making sure they were ready to bake for a 2 a.m. breads class. “I really liked that position,” she said. “I liked being the person who my peers looked up to and that's when I realized that I wanted to teach.”

Daquet followed her newfound dream to Viking Cooking School in Garden City after graduation where she worked as a teaching assistant in a class of adult students. A year later she accepted a position as an aide in the Culinary Program at Western Suffolk BOCES. She stayed there for several years until she moved to ESBOCES as a TA in a special career education classroom and then eventually become a teacher. Along the way, Daquet earned her CTE Teaching Certificate and Master’s degree.

While the move to the teaching side of the classroom was a seamless transition for her, Daquet did have some self-doubt about whether she was the best teacher for a special career education class since she had never worked with that population. To her surprise, she discovered that there is no other place she’d rather be teaching. Helping her students each reach their personalized goals and doing so at their own pace has had a profound impact on her as a teacher. She loves watching them grow when they encounter a new recipe. At first they are intimidated because they believe it’s too difficult, but when they eventually deliver the end results, she takes so much pride in their accomplishments.

“Here, we take every student and every single one of their goals individually. Everyone is different. Whatever they can do on their level is their goal. No one is held to the same standard. I am so inspired when they hit those goals.”

Click here to read more about our Culinary Arts Program