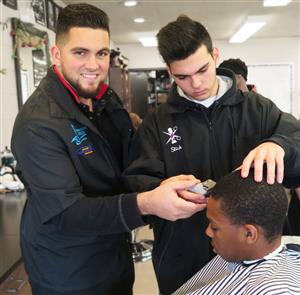 “In my day, a barber was a counselor,” Eddie said in the movie Barbershop. “He was a fashion expert. A style coach. Just a general all-around hustler.”

James Ricciardo, a Barbering teacher at ESBOCES was inspired to be a barber by the 2002 movie when he was 15. The story of a historic barbershop on the South Side of Chicago showed him the passion and artistry behind this historic craft and he started cutting the hair of his teammates on the basketball and baseball teams. When he started attending St. Joseph’s College, he kept up the practice, keeping the hair of the baseball team clipped and crisp - and his services were free of charge.

While he was in college, James enrolled as an adult student in the ESBOCES Barbering Program and after completing the program, he started accepting compensation for his services. He would either cut hair in his home, or fill in at local barbershops when space was available.  He had also begun working as a sub in the ESBOCES Barbering Program, filling in for his former teacher and mentor, Luke Mahoney.

James graduated college with a bachelor’s in marketing and minor in art, and although business concepts came naturally to him, he found that working in an office just wasn’t a good fit for him.

As James spent more time in the classroom, he began to feel more drawn to teaching and his passion grew. “Now in my fourth year teaching full time, I see the enthusiasm in the students and it’s the most rewarding feeling.”

James has become a barber much like the one Eddie described in the movie that started it all. He’s become not only a barber, but a mentor to those who join him in the barbershop, inspiring them to approach barbering as an art form and showing them how to achieve their dreams, one clip at a time.

Click here to read more about our Barbering Program