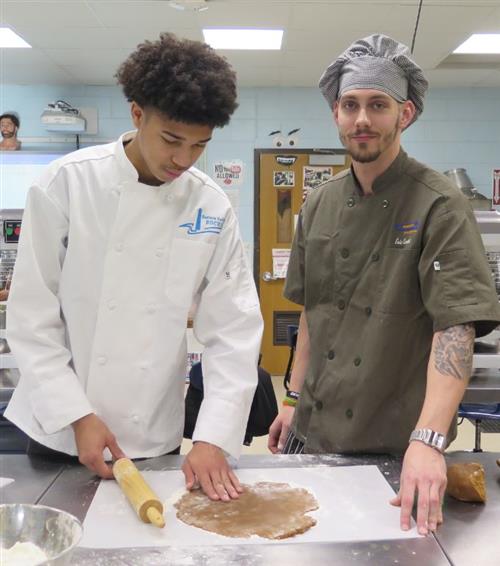 Eric Ceretti clearly remembers the moment it hit him that he wanted to be a teacher. He had been subbing for several weeks at Islip Career Center in the Introduction to Baking class. During a conversation with a particular student about some of the material they had covered to date, he realized how much this student had grown in a short amount of time. “This student was struggling in his academic classes but here we were talking about cooking methods that he didn’t even know about in the beginning of the year. Seeing a kid whose lightbulb goes off and watching them realize they’ve learned something and that they can now do something is great.” It was in that moment that Ceretti knew he wanted to turn a temporary opportunity as a substitute teacher into a permanent career.

According to him, he was always watching ESPN or the Food Network as an adolescent. “It was either sports or cooking,” Ceretti said. He learned about the ESBOCES Culinary Arts Program at the end of 10th grade and said, “The second I heard about the opportunity, I was in my guidance counselor’s office. ‘Get me in,’ I told him.” Ceretti attended Milliken Tech for two years and worked in the industry after spending a year in the Culinary Program at SCCC. His plan was to open a deli or food truck because issues with his knees and back prevented him from spending half a day on his feet as a line-cook in a restaurant. While on that path, he started working as a substitute culinary arts teacher at ESBOCES. “I wasn’t even thinking about being a teacher, but I thought I could earn a little extra money,” he explained.

Today, Ceretti teaches Culinary Careers at Islip Academic Center, an ESBOCES high school that also offers several introductory special career education programs for students with severe behavioral and limited anger management issues. He demonstrated as soon as he stepped into the classroom that first day as a substitute that he has a gift for motivating even the most difficult students and helping them to make better decisions that will benefit them long-term. For example, he recently crossed paths with a former student who had been in and out of trouble and was currently working at a deli. He thanked Ceretti for providing him with the skills that led to his employment. “He is not on the streets and he is not selling drugs,” said Ceretti. “Give me the toughest kid. I connect with them. I love coming here, I feel like it’s not work.”

Click here to read more about our Culinary Arts Program